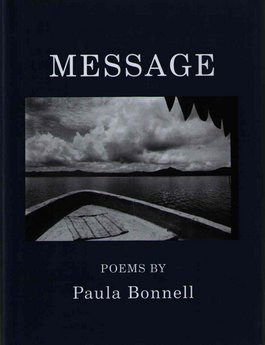 Message is a book of my Texas years, with flashbacks recalling the patchwork of fields that quilted the hills surrounding my home town of Johnstown, Pennsylvania. Most of it was written in Texas. Of the few poems in it written elsewhere (fully or partly), "Wordsworth" and "Lud" are included in the book not only because they belong to the time which yielded the work from which the book was drawn, but also because they concern Texas.

The title poem is a summons to the possible, a green and grey contrast to the white of Wallace Stevens's snowman. While the words which may eventually yield a poem can begin anywhere, it is always by the agency of some particular, and for me, often one of place. "Healing" began to come to me while I was sitting in a car outside the Four Seasons Laundry in Houston. Its sign was divided into four equal bands: blue, green, yellow, and brown. Musing on what seasons those colors might represent led me unexpectedly into an account of a journey to the interior of the psyche from which escape is not readily possible. "Traveling East" tells of departing from "the nurturing country" which Texas was for me.

When I moved to Texas, I was in despair about whether I would ever write again, believing as I do that something must be given, not that inspiration is available by appointment. When I left seven years later, I was surprised to be taking with me what felt like a fairly substantial body of work, including the "Eurydice" sequence which had blistered its way through me -- making demands that its jagged roughnesses and inconsistencies not be tamed or prettied up in any way but were instead to be seized and ridden until I was thrown into the dust. If this semblance of a steed was a horse, a fit, a whirlwind, or even a large dog seizing me by the scruff of the neck and shaking me, I couldn't have told you. "Eurydice" was the unexpected outcome of a by-then many-years-old ambition to write a sonnet sequence about Orpheus, of which I had never been able to "get" more than a line or two. When, instead, "Eurydice" began to arrive in erratic bursts, it had a more otherworldly, even demonic force than any of my work before or since. It was work that I was a little afraid of, perhaps because of the way it had seemed to claim me, making the other and the personal into one molten stream.

Mary Christine Delea says "I have her book Message, which I bought after hearing Garrison Keillor read "Midwest" on The Writer's Almanac. I used to buy record albums, then cassettes, then CDs, for the love of one song. Now I have iTunes. But I still buy books of poems for one poem. And "Midwest" is a fabulous poem."

You can read more of what she has to say at
http://www.christinedelea.com/content/resources 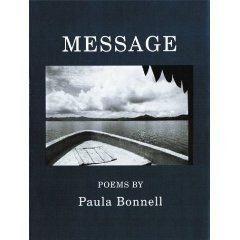 The Amarillo Globe News noted that "one of the poems" in Message -- "Wordsworth" -- "honors the teaching of Don Harrell at the University of Houston, and the title poem takes the reader on 'the road west . . . into a real Texas free of symbols . . . a few snags in the river when you get past Goliad' " and calls the book "a remarkable debut collection that is rich in imagery, metaphor, simile -- and that deals with original themes and interpretations, all in captivating language.". . . . . . . . . . for full information on Message, please go to the BOOKS page . . . . . . . . . .

In March my mother would force the forsythia
bringing them in from the melting yard
and in the warmth of the house
flowers would flow from the freckled wands
to make ours a springhouse
sure with the force of forsythia
ballooning a silk of sky unsnowing above us.

The drifts of the sky today fall to
dissolve in horizony heat on the tip
of the highway which lunges toward our car.
Its spots swell to become lumps of rusty fur
and it shoots out behind us so fast
that the fur fluffs in the haze
and the skunk smell speeds away

to be lost in the rushes of distance
where our yard of forsythia
blooms. The bushes there are
foolish with yellow -- their long arms
dangle and wag at the hummocks
of crabgrass, their roots
anchor in the mound where
Mrs. Greiner's dog was buried in 1942.

"Forsythia" -- which appears in MESSAGE -- was first published in Andrew Mountain Press's A Poem in a Pamphlet series.

I thought of stopping to take a photograph. I would call it
"Mist and the Ravages of Tent Caterpillars."
But the mirror on my 35 was jammed,
and this was interstate -- EMERGENCY STOPPING ONLY --
just a few trucks and tourists cocooned on the shoulder;
so I held the truck to 50 on the grade,
watching the yellows and whites converge
to blank out objects, distinctions, horizon.
It was all one.
I entered it on a lizard-tongue of a road.

Across the median, three tractor-trailer rigs
wormed their way up the concrete.
Ahead a punchhole of a sun bit through the murk,
and off to the sides small glosses shone
where caterpillars made their cotton candy of the trees.
I am like them:
coming out of the nurturing country
into expectations disparate as leaves,
I make mouthings of trucks, fog, worms,
and bundle the landscape with my states of mind.