a poem from Airs & Voices in honor of Martin Luther King, Jr. is given below.
WORDS OF A MAN
WHO MADE HIS NAME

I bore the names
of three men:
the protestant, a slaveholder,
my father.
I saw
what I had to do
and did as much of it
as I could.
I leave
the rest of it
to you. 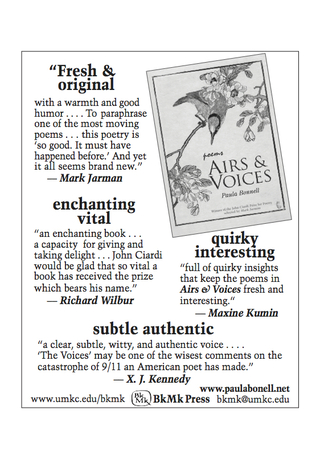 Here is the full text of quotes for Airs & Voices
given in abbreviated form above:

The voice in Airs & Voices is fresh and original. Though the poet never labors to be significant, even the slightest poem lingers in memory. Wallace Stevens's thoughtfulness is present, but so is his playfulness. Kenneth Koch's playfulness is here, but so is his thoughtfulness. Whether speaking as various snowmen in "New Song" or as parts of a household in "Domestic Opera," the poet finds just the right expression for the subject, with a warmth and good humor that are in short supply nowadays. Sometimes the compassion is startling, as in "Elegy for an Unlikeable Sister-in-Law." Yet an austerity can take hold as well. "The Voices" makes us listen again to the things we said in response to 9/11. Finally, to paraphrase one of the most moving poems in Airs & Voices, "History and a House," this poetry is "so good. It must have happened before." And yet it all seems brand new.

This is an enchanting book. Page after page, Paula Bonnell's poetry is full of fresh sightings, sure phrasings, and a capacity for giving and taking delight. She can also deal subtly with painful or touching things, as in "History and a House." John Ciardi would be glad that so vital a book has received the prize which bears his name.

Bonnell's voice is low-key but full of quirky insights that keep these poems fresh and interesting. "Elegy for an Unlikeable Sister-in-law" concludes: "Lord, she annoyed us. / But she was ours." "In Praise of Leeks" captures their "fresh chartreuse / a tendresse of green." And the scholar who unearths 16th-century theatrical manager Philip Henslowe's list of properties selects from it: "Item: / one cloak for to go invisible."

Paula Bonnell has a magic touch. Reading Airs & Voices in its entirety, we hear a clear, subtle, witty, and authentic voice; and hearing it, we end up charmed. Engagingly, "An Alphabet" and "Some Tax Aspects of Life" have memorable fun with language; "Serving Two Cats" proves Bonnell one of our best cat-watchers since Christopher Smart. Besides these distinctive poems, I'm particularly smitten with "In the Middle of the Air," "Falling Asleep," "Reconstituting Paris," "The Faraway Nearby," The Island," and more. "The Voices" may be one of the wisest comments on the catastrophe of 9/11 that an American poet has made. 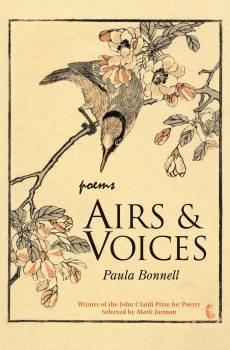 for full information on Airs & Voices, please go to the HOME page and the BOOKS page

Better than a poetry reading is an ensemble presentation by people with talent for acting, public speaking, theater.

Acting on this belief, in October of 2010, I worked with three friends, amateur actors and experienced public speakers, to give an ensemble presentation of a group of poems from Airs & Voices on the Local/Global/Voices themes that run through the book. Our diverse audience at the local branch library proved appreciative and whetted my appetite to work with actors and speakers who have a gift for presenting experience through the spoken word.

In June of 2012, five talented and experienced actors presented a reading of poems from Airs & Voices in which they each chose as solos several poems that appealed to their individual temperaments, and the ensemble worked together to present several multiple-speaker poems. The reading was given in Nourse Theatre at Carleton college as part of a multi-class reunion. I got to sit in the back of the small house, filled to near capacity, and listen not only to the poems but also to the rustles, murmurs, and laughter of the audience and join in the applause. This superb cast consisted of David Willis, Dianne Burke, Morgan Holmes, Jennifer Harrington, and Dylan Fresco.


Other presentations could be extracted from Airs & Voices including:

BIOGRAPHY OF A CAT. This selection includes "Serving Two Cats", which won a Sue Saniel Elkind prize from Kalliope, where it was first published in the Summer 2006 issue, some others from the book, and several not in Airs & Voices.

OF BIRDS AND THE RIVER. The river that runs through it is the Neponset, the southern boundary of the city of Boston, flowing into the Boston Harbor; the birds include songbirds, crows, geese, a woodpecker, a mockingbird, and anonymous birds who "speak with the breeze."

THE WEIRD ONES: Time, Love & Space, drawing on poems that share the willingness of animated films to play with reality by seeing from unusual perspectives or condensing and conjoining elements of ordinary reality to communicate aesthetic or emotional truths.

Any of these -- and probably others as well -- could be done as ensemble theatrical presentations, and I would welcome opportunities to work with any college, university, or high school theater group -- or amateur or professional theater group interested in venturesome alternative material -- to put together a rewarding evening or afternoon of poetry presented by people with a gift for performance. Modest compensation and the opportunity to sell books could lure a living writer to your campus, school or theater. See Quick Links to contact me and explore such possibilities.