You can now reserve an autographed copy (or copies) of Before the Alphabet by clicking here.

Send e-mail by link above to reserve one or more copies, then mail your check or money order to PB, PO Box 51860, Boston, MA 02208. $14 per book plus $2.49 shipping for one copy, $3.49 shipping for two copies. If payment not received within 30 days after your reservation, reservation will automatically cancel. This is not a limited edition in the sense of numbered copies, but the supply is not unlimited. Reserve now to be sure you can get the book.

You can also buy Before the Alphabet at Barbara's Bestsellers in Boston's South Station. 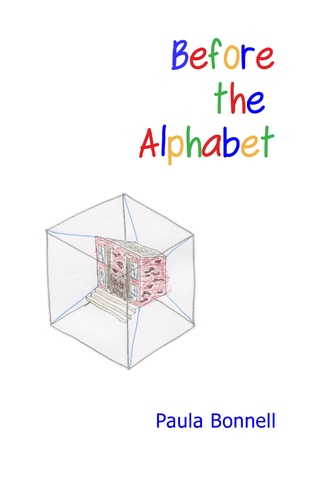 drawing of tesseract with schoolhouse as inner cube

about Before the Alphabet

Before the Alphabet revisits the children's garden, a first year out of the home but not yet at the school where reading, writing 'n' 'rithmetic are taught. The curriculum is shapes, making things, and songs -- the sources of the arts, crafts, mathematics, and abstraction. The subtext is socialization. Like its subject the kindergarten, this chapbook is both large and small, partly event and partly meditation, part of the past and also the present, proceeding through time yet contained in memory -- a microcosm of the world in which it is enclosed, holding both light and shadow.

reactions to Before the Alphabet

When Airs & Voices was being prepared for publication, BkMk Press sent me its questionnaire to authors, asking (among other things) who the book's most likely readers would be. My answer -- equally applicable to Before the Alphabet -- was "the general reader, someone who reads widely -- for enjoyment and stimulation." Among those who've read and liked Before the Alphabet are friends who say they rarely read poetry and friends who are well-versed in poetry.

By profession, those briefly quoted below are (alphabetically by calling) an artist, a barrister and solicitor, a botanist, a chemist/social worker/non-profit manager, a city planner, a fiction writer, a grammarian, an international IT manager, a writer of phonics curricula, and a poet. Their quotes are given chronologically by receipt date. All quotations below are given with the permission of those quoted.

You have done well. Starting next week I will read a chapter a day of Anne Perry's newest Christmas book to a friend of brilliant intellect who lost his cognitive skills through injury and cannot read any longer. I think, this year, I will add a dessert of Bonnell poems.

I LOVE it. I liked all the poems, and the way they built on each other, but in particular I found "Crime & Punishment" very amusing.

the poetry within is very evocative. Got me thinking about my own little grade school back in Kansas, and the way the world felt then

I just read your new book and loved it! Now I understand what you were getting at [about the drawing for the cover] when you described it to me. A world within a world, works wonderfully well on the bright white page, too. I think my favorite poem in it is "Divisions"! So simple and austere, yet it feels like a child's mind at work . . . And I love the ending with "the small model of the Great Room, / the Kindergarten Auditorium." A perfect composition. I'm going to read it several more times.

"Lesson One" spoke to me immediately and deeply. [Among the other] "Lessons" . . . the one that strikes me as hilarious, but utterly serious, is "Crime & Punishment." In fact, I read it to my family at dinner. . . The way your poem moves from the wiggling to the puzzling to the precise final word . . . is superb.

Completely charming -- the cylinder, the girl in the tower, the last poem . . .

I enjoyed your book, especially the first poems about geometric shapes, which give us a unique child's perspective that could inform teachers of young kids -- and the kids they teach might also enjoy these poems! I could resonate with all the school experiences you relate.

In Before the Alphabet you capture the wonder of childhood when everything is new and fascinating, and the innocence of young children, when they see things in new and incomplete ways, simply because they have limited knowledge and experience. Many people do this. But you do something else, too, that fewer are able to convey. You also capture the insights that children have that adults lack because children have not yet been "taught" how to think or react, and you expose the tremendous vulnerability that children experience because they are small and powerless. I find the poems very moving.

I received Before the Alphabet and really enjoyed it. There's a delicacy and grace to it that is captivating. I appreciate how it builds to the end, with the various strands/building blocks all coming together into the "small model". I really liked "Cone" and "The Unfinished" (although I respectfully disagree with the boldface and italic of "No" and "not") as separate poems.

a lovely book -- [it gives] the feeling I have when talking to young children who are still at ease, happy children I guess I'd say, before the deluge . . .

The poems are delightful and several of them really do create the moment a child meets a new and wonderful (or not) thing. The first-ness, the strangeness of it, and the fun of it and the loveliness of the things we encountered as little children, and the frustrations (as in "The Unfinished"

but NO
very funny, very touching). I want you to know that the book seems wonderful to me, the language both spare and very very evocative at the same time. A wonderful and totally effective combination.

What is a chapbook?

Some famous publications that might today be considered chapbooks include Tom Paine's Common Sense, Allen Ginsberg's Howl -- issued as the fourth of the Pocket Poets Series by Lawrence Ferlinghetti's City Lights -- and the book which Professor Strunk of Cornell called "the little book" and his student E. B. White made famous as The Elements of Style. Often smaller in format than a full-length book and never as long, these little books claim attention partly because of the brevity within which they are complete. Some are issued in limited editions, and may become sought-after collectors' items. Leonard and Virginia Woolf published a series of essays in pamphlet form as the Hogarth Essays. One of these, by their friend Charlie Sanger, a lawyer, examines the series of transactions and events through which Heathcliff acquired all the property of the Earnshaws and the Lintons. It can be read today on the internet at several sites, including the one between this paragraph and the next.

I have a little square copy (not a first edition) of Ferlinghetti's Pictures of the Gone World, the first Pocket Poets book, which I cherish. It contains about a dozen poems and its cover price is $1. I bought it used and probably paid more than that, though I don't remember the amount.

These days chapbooks may be issued in a wide variety of formats. Before the Alphabet is similar in cover dimensions to a trade paperback, but is not as thick. Chapbook covers are usually sturdy, similar to trade paperback covers. To give their little books oomph, publishers add such touches as color inner covers, which serve much as endpapers do in hardbacks -- separating the world inside the book from the outer world with a bit of emphasis and visual interest. A full-length poetry collection nowadays may be as short as 48 pages; a long one is 80 to 100 pages. Poetry chapbooks are about half as long.

The very first publication from Hogarth Press was Two Stories, Leonard's "The Three Jews" and Virginia's "The Mark on the Wall." At the time the Woolfs sent a pre-publication announcement inviting buyers, Virginia had not yet written a story for it. "We took a good deal of trouble to find some rather unusual gay Japanese paper for the covers," Leonard wrote in the volume of his autobiography called Beginning Again. Two Stories appeared in July of 1917 in an edition of 150 copies and 134 of them were sold to 87 people, Leonard recorded, adding that "all but five or six of them were friends or acquaintances."